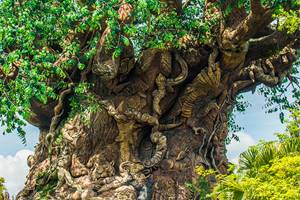 This is the Icon of Disney Animal Kingdom. An interestingly awesome sight for a synthetic tree, it looks real to the naked eye, having over 100,000 leaves on it and more than 300 animals carved in the base and roots.

The Pangani Forest Exploration Trail is an exhibit that is a recreation of the tropical forest found in Africa. It is a walking tour that you can take at your own pace. There are places you can stop along the way to find out about the different animals of Africa as well as observe them. It is an endangered animal rehabilitation center, of sorts. The research center contains some smaller inhabitants of the park and there are plenty of opportunities to learn about each of the animals, as you go through each of their areas. Mornings and early evenings are great times to see the animals being active. The Gorillas are the draw for this trail walk.

This tour feels like an authentic experience. It will make you feel you are on a true African safari. As you travel through the 100-acres of savannah, with all the accuracy that a true tour would actually give you, take advantage of your guide, and ask them questions as you go. They are very knowledgeable about the animals. Bring your binoculars. Plan to ride this tour in the morning or evening when the animals are more active. FastPass is offered for this ride so you don’t have to stand in line.

Festival of the Lion King

This theatrical production is located in the Harambe Theatre in Harambe Village. The theatre itself is octagon and sectioned to provide areas for the cast to allow the audience to engage in participating, in the beginning, to ‘call’ the characters in. The program itself has beautiful pageantry.

The Wildlife Express Train is the way in and out of Rafiki’s Planet Watch. The Animal Cam is useful when the animals are in the Habitat Habit area, and backstage. The Affection Section is best visited in the mornings when the animals first are active and let out into the areas, as well as the Veterinary, Conservation Station, and Training Exhibits. The Sounds of the Rainforest is an audio soundtrack in a booth that seats six. The lights dim when the track starts to play.

The Maharajah Jungle Trek is an exhibit that is a walking tour of Southeast Asia. The backdrop to the beautiful animals you find here is the art and architecture of the ancient ruins of India. The best time of day to see the animals is usually in the morning or after 4 pm. The tigers are the draw for this trek.

This is a white-water adventure ride hidden within the story of Asia. It starts off with an outdoor entrance area that winds through artifacts in a field, as you make your way towards an Asian-style building. You will find pieces of artwork inside while making your way to the 12-man rafts. You are told about the ecological ramifications when the rainforest is illegal logging and will experience the rapids as you see what can happen.

This roller coaster ride tells the story of the mythical Yeti. There are steep climbs, fast turns, twisted and broken rails, that sends the occupants plummeting backwards into the darkness, then forward, again. Shadows of an angry Yeti tearing at more tracks can be seen during the ride. You may see the Yeti face-to-face every once in awhile, during the ride. This is due to a malfunction. The Yeti figure has developed mechanical issues over the course of time, and is, for the most part, immobile.

This ride will appeal to the children although children under seven will need to be accompanied. It is a ride that reminds you of flying tin Triceratops that spin slowly around a top-like middle base. Each TriceraTop can hold four people comfortably.

Performed in Dino Land U.S.A.s’ Theater in the Wild, this is a musical similar to Broadway’s version of “The Lion King.”

Use the following form to leave your comment on this article. 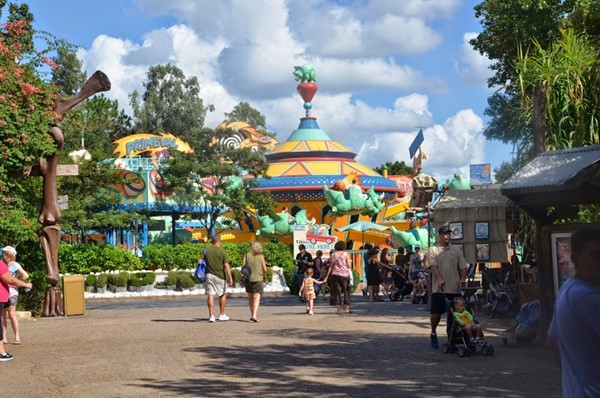